Fleece scarves, Drippy sleeves, and the Inability to be in two places at once

As I said back in October when I came out of my Pill-Bug mode the first time, I’ve never really had any big desire to run 13.1… or even walk it.  But considering I managed the Breast Cancer 3 day 10 years ago, I wanted to do something similarly significant for colon cancer, for Tricia and my mom.  So I put together a training plan, started to recruit a team, and got on with it. Or at least that was the plan.
My training started out alright, but as always seems to happen life gets in the way. Homework for the little man, holidays, work, weather… life.  But I was still at least staying somewhat active until the first week of Jan. I had a sharp, stabbing pain in my abdomen, which at first I did my best to ignore. But after 2 days where I couldn’t sit up straight without meds, I went to see my doc. Instead I got a PA who decided that since I was “Fat, Female and Forty” it was gall stones, and I quote, “Not urgent,” and I was to get an ultrasound, but it wasn’t a hurry. It’s silly, but I was most offended by being called “forty-ish.” For the love of God, my birthday is in December, I’d only turned 37 two weeks before.
Anyhow to make a long story short, when I got an ultrasound a week after the pain started, they said, “No Gallstones, you should get your appendix checked.” By now, I was still in a fair amount of pain, but was walking around, so did a couple more tests, and after the CT Scan the next day they told me not to leave the radiologists office.  Next conversation was with someone from my Dr’s office asking if I needed an ambulance, since I had a ruptured Appendix, and needed to go directly to the ER. Do not wait for my husband to drive me, go now. Which seemed dumb, since I’d now been in pain for 8 days.  Went to ER, got appendix out, and had to spend a fair amount of time on REALLY STRONG antibiotics since from what they could tell, I’d been walking around with a ruptured appendix for 6 days. My mom & husband, etc. kept telling me, “You could have died!” I scoffed at this until at my follow up appointment I mentioned to the surgeon who said, “yes, definitely you could have died.”  We agreed to keep that from my mom… so I guess I hope she skips reading this post. I hate “I told you so;” unless I’m the one saying it.
So two long paragraphs to get to an actual legitimate reason that I hadn’t spent much time training.

By the week before the event, I was getting to the gym and spending 90 min at a time on the elliptical, but that’s nowhere near enough time to prepare for the Mercer Island Half, which I planned to walk on March 20. Beyond having issues training, I was having problems with the website for the team I set up as well. So even the day before the event, I didn’t know who was on team TJ Booty (short for “Tricia, Judy, and their fabulous Bootys”) So with no way to organize the team, I decided to make fleece scarves. Not only are they one size fits all (and fairly inexpensive for me to make since with no contact info, it’s not like I could ask people for money) but sensitivity to cold is a common side effect to colon cancer chemo, so if no one else liked them, I was pretty sure that my mom and Tricia would still appreciate it, which is all that really matters to me. 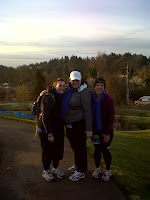 The morning of the walk dawned and I tried to put aside the concerns that had been plaguing me all week. Could I really do this? Would I rather do the 5k with my mom? Had I really gone too far this time?  By the time I picked up my friend Suzanne to carpool to the event, I was ready to go. Still a little scared, but not enough to consider giving up.  We got to the park, found my friend Judy (not my MOM Judy, who is a colon cancer survivor) who wanted to run it, but decided to walk with us, and waited for the 4th of our group. We’d agreed to meet at 7:30a, which was the walker start time, but other than Elise, we were all a little early.  By 7:45p we were getting a little anxious, so Suzanne sent Judy and I ahead and said she and Elise would catch up.
Despite being the first day of Spring in the Pacific Northwest, we could not have asked for better weather. The morning was chilly, but when you’re walking your ass off, that’s not a bad thing, and dang it, I made scarves! Despite the chill, it was clear and dry. If you’ve never just taken a walk on tree lined streets in the Seattle area, you’re missing out.  Judy and I were walking away and chatting as we walked briskly, I’d guess a 17-18 min pace. It was kind of fun to hit the water stops, we got a lot of personal attention, since the initial wave of walkers had long since passed by.
After a couple of miles, my bad ankle (the one I broke a few years ago) started to ache a little. Not enough to stop, or even really limp, just to remind me that it was there.  We kept going. A guy out walking his dog took our picture with the sign for mile 5. Still feeling pretty good.  I remembered that I’d put my workout play list on my husband’s iPod touch so I could play it out loud and fired up some tunes.
We were into mile 6 when we heard the police escort. The first runners were coming. Judy & I cheered them on…  the first several were SO serious. Didn’t even crack a smile when we were cheering them on. Skinny little dude after skinny little dude, too intent on finishing their 13.1 to acknowledge our cheers. But when the first female runner came by us, she heard us cheer and gave us a little thumbs up.

come tri with me

I admit, in part this is to save my Facebook & Twitter peeps from having to listen to me give TMI about my training experience, but the REAL reason I started this blog is to share this experience with others.

I'm not using my name because I want anyone who reads this blog to believe that this could be you. Because if I can do this anyone, seriously ANYONE can. Guys just may not have some of the bra hunt problems. ;-)

So since I stay without my profile, as I put there, Lady D is a bitch, a lover, a child, a mother, a sinner, a saint, and I do not feel ashamed of doing my very first triathlon, despite my current weight. I did my first triathlon at 35, mother of a six year old. And believe it or not, I'm not done.